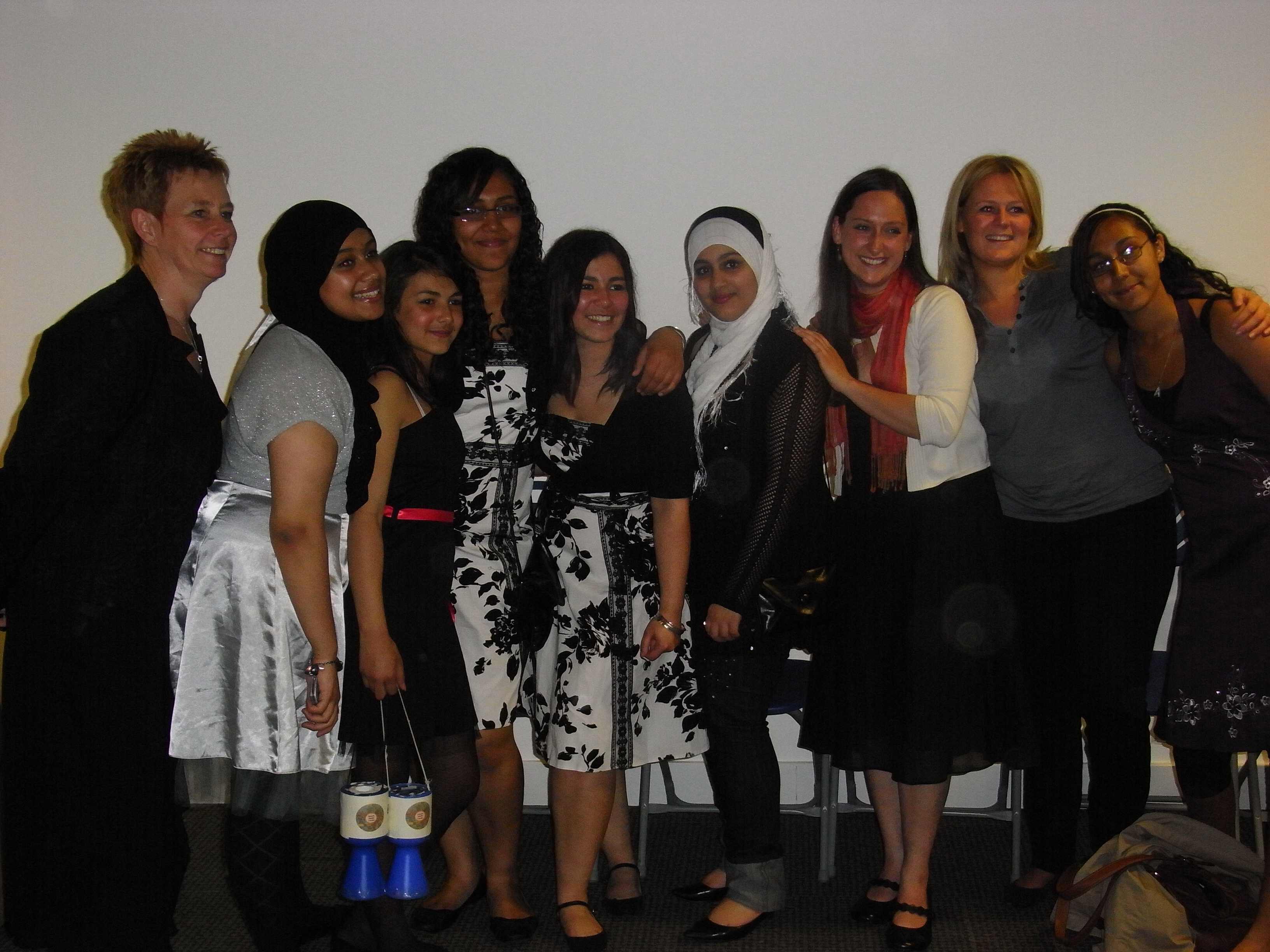 With only a few days to go until I get married, I’m running short on time to type out a much needed post about the absolutely fantastic Mediabox funded project with ‘Girls in Action’. It’s been a whirlwind of a project, with the weeks rushing by in a haze of planning, filming, editing and lots and lots of giggling! However, to give a bit of a taste here’s the press release. I’ll try and write more soon! Well done to Anisa, Sabriya, Hannan, Houaria, Maryam and Eaman for all of their hard work!

A world-premiere brought a touch of glamour to the Millennium Point ThinkTank Theatre last night as friends, family and excited fans were treated to a new film by six young Muslim Women from Sparkbrook, Birmingham. The fifteen minute short-film, Be Yourself, which stars and has been written and directed by members of the Girls in Action group, works to challenge stereotypes and combat prejudice.

Girls in Action was formed as part of the Balsall Heath extended schools programme, in April 2007, as a direct result of consultations with parents and young girls living in the area who wanted a safe and secure place to meet and the chance to develop new opportunities.

The Balsall Heath extended schools programme brings local schools and organisations together to provide young people with the opportunity to engage with new and exciting initiatives including healthy lifestyle projects, family learning programmes and after school clubs such as sports, arts and crafts and cookery classes.

“It has been great to be part of this media project and watch the group develop together,” said Alison Moore, Extended Schools Coordinator. “This film is a great example of the really positive impact schools can have on the community by providing extra opportunities for all.”

The premiere was brilliant and the whole night went so well. In the end, it was a wonderful opportunity for the girls to showcase all of their work and people commented about how impressed they were with the professional standard of the film.”

“Seeing the film on the big screen was a fantastic feeling,” said Houaria Mohammed, 18, one of the young women involved. “  It gave us the chance to show everyone what we have achieved and also give people an insight into our lives and experiences. As young Muslim women, people put us into pigeonholes and it’s about proving to people that we’re more than those religious stereotypes – we have a life with interests and ideas that are common to everyone. Plus, the after party was great!”

With research showing that extended schools are already benefiting the children and communities taking part, every school in England will offer extra services by 2010 ensuring that all communities can participate and benefit in this way. More information about extended services offered through schools can be found at www.direct.gov.uk/parents.

The past five months have been incredibly busy, mainly editing, so my plans to Blog regularly have fallen by-the-by somewhat! I’m taking the foot off the pedal a little bit after too many weekends and late nights at the computer, so I think that this is probably quite an apt point to report back on some of the projects that are now in the can or are near completion.

Posts on some of my recent projects should follow shortly, but in the meantime here is the lowdown on a recently completed project, ‘Yards Ahead 07/08’ for Yardley Constituency Libraries.

I’ve now updated the site and created a separate Libraries page to include information on all of the work I’ve completed for the rather lovely librarians, so you can find out a bit more about the project there. As always, it’s been a real joy to work alongside such dedicated and enthusiastic library staff, whose commitment has meant that thousands of children and their families have had really exciting library experiences. I’ve received a lovely e-mail from Jo Avery at Glebe Farm Library commenting on how well the film captures the enthusiasm of the children. However, as with all of the work I’ve done with them, walk into a Yardley Library and it’s pretty inescapable!

The film was premiered at a Chief Librarians’ conference in Solihull and was well received. Librarians will now be distributing the 200 DVDs I’ve produced to a wide range of people to try and convince others that this way of working can play a crucial role in ensuring libraries meet the needs of local communities now and in the future.