Have you been to the theatre lately?  What did the set look like?  The costumes?  Was there dancing?  Impressive lighting?

Most of us take for granted our ability to see what is happening on stage – theatre is such a visual medium.  But ‘Extant’, Britain’s leading professional performing arts company of visually impaired (VI) people, is making huge leaps in ensuring that people without sight, or with limited sight, are able to have a rich, stimulating and enjoyable experience of theatre. 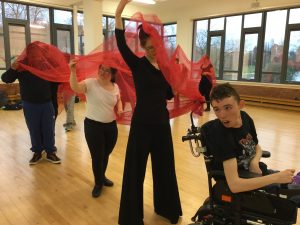 I have been documenting the first year of Extant’s ‘Regional Hub Building’ programme in Birmingham and Manchester, working alongside Extant’s Jodie Stus.  Working in partnership with The Lowry in Salford Quays and mac Birmingham, Extant have developed a comprehensive programme, focusing on creating more opportunities for people with VI to engage with drama and theatre.

The first year of the programme has involved performance, participation workshops and training – all of which are explored in the film.  However, for me, it seemed only right that everything that I had learnt through documenting the project came into play when editing the film together.  So, this is my effort to make a film with a clear narrative which isn’t reliant on visuals, which makes as much sense for people without full vision as those with.  I’ve focused on using bold text, high contrast and simple graphics and I have tried to audio describe cut-aways of performances and workshops.

I would be eager to find out what ‘viewers’ think of the film.  How can film makers improve accessibility without compromising narrative and style?  Do get in touch with your comments!