Birmingham Friends of the Earth will be giving tours on 15th and 16th September of the newly refurbished Warehouse building, which they took lease of way back in 1977.  The building has seen many changes in that time, and it is apparent from our project that the walls hold many stories!

You can delve into some of this history through coming along to view the film at 2:30pm on both days.  The film has been created using archive photos, old campaign literature and volunteer led oral history interviews.  It gives a fascinating insight into the evolution of the building – from paper recycling depot to a space for campaigns groups to meet, a home for a myriad of small businesses and now a modern and slick meeting space for thinkers, makers and doers involved in environmental issues.  As well as stories about BFoE’s work, there are also stories about the formation of Push Bikes cycling campaign and the Urban Wildlife Group, the forerunners of The Wildlife Trust for Birmingham and the Black Country.

Alongside the screening will be the launch of a beautiful booklet, designed by Shannon Lattin, which has been produced as part of the project.  It covers the story of the building from 1977 to the current day.  It is packed with interviews, photos and information about the many different elements of the work conducted in the building.  Do make sure that you grab a copy!

For more information go to the Birmingham Heritage Week website.

Back in February I wrote about an exciting HEDGEHOG related project that I had in the pipeline.  Well, I’m thrilled to share the finished film – it’s going down a storm with the kids who made it, their classmates, teachers, parents and the super people who worked on the project.

The film is the culmination of a partnership between Friends of Brandwood End Cemetery, The Wildlife Trust for Birmingham and the Black Country, Birmingham City Council Park Rangers and pupils from St Albans RC Primary School and Woodthorpe JI School to give ‘Help for Hedgehogs’!

The short film was made by pupils at both schools, and I gave hands on support along the way, as well as editing it all together. It is packed with information about how YOU can help encourage hedgehogs into your own garden and neighbourhood. Hedgehog numbers have declined dramatically in the past 50 years – unless communities take urgent action we may witness their terminal decline in our lifetime.

This project has been funded by the Heritage Lottery Fund, and took place between August 2016 and July 2017.

Really enjoyed my child taking part in the hedgehog project.  It has made us all curious as a family to do our bit to help the hedgehogs, but also spread the word to others.  This project has built confidence and self esteem in the children, strengthened relationships for all involved, promoted curiosity in nature and started a very special journey for children, families, schools and their communities.  It is a joyous project that should be rolled out and continue to be funded to help many more.  Thank you.

Some of my favourite projects are the ones which pull together lots of the things I love.  Last year I worked as a Community Engagement Officer for The Wildlife Trust for Birmingham and the Black Country, and found myself in the lucky position of concocting one such project.

‘Help for Hedgehogs’ is a Heritage Lottery Fund funded project, focusing on Hedgehog habitats and activity in and around the beautiful Brandwood End Cemetery in South Birmingham.  The Friends of Brandwood End Cemetery have worked incredibly hard over the years to develop and celebrate the Cemetery, but wanted to focus on practical steps that they could take to support wildlife in the area.

The result is a project which involves conservation work such as creating bug hotels and hedgehog homes, alongside small mammal surveying, art and craft activities, informative talks, knowledge sharing, school workshops and, naturally, community film making.  Emma Sargent from The Wildlife Trust has been working alongside some of Birmingham’s Park Rangers to deliver some really exciting, hands on learning. 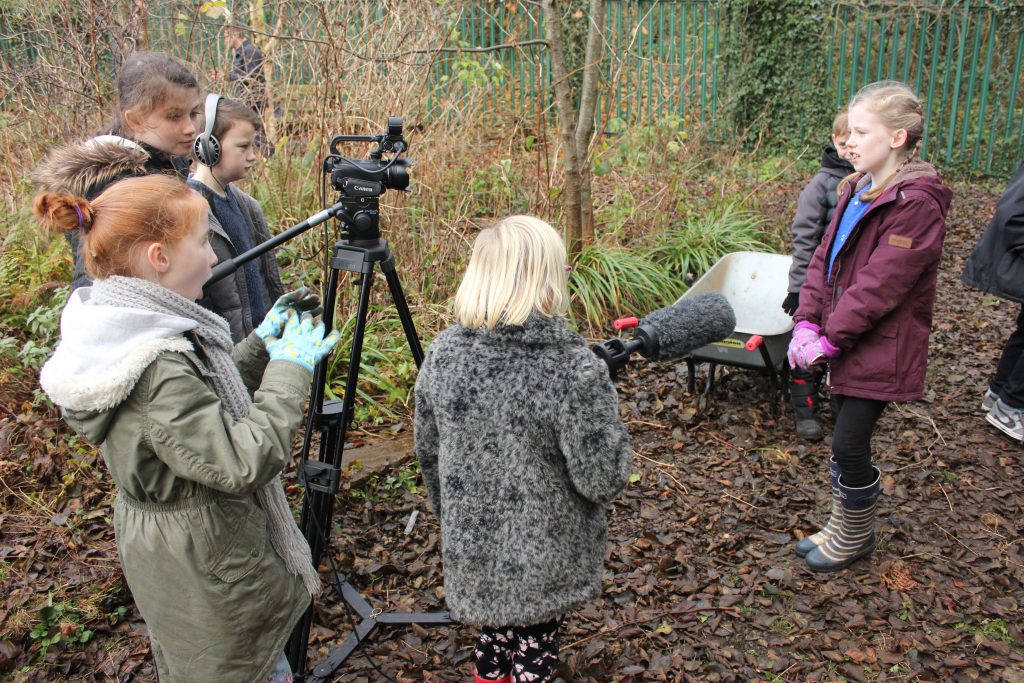 I have been working with pupils at two local schools – St Albans and Woodthorpe Primary – to document the project.  Starting from basic film-making workshops, the pupils then went on to film on location whilst their classmates built bug hotels and hedgehog homes.  It always astounds me the speed of the transition between kids nervously approaching a tripod to taking responsibility for directing a shoot!  Some members of the crew conducted interviews and presented to camera.

We hope that the final film will carry key messages around what people can do to encourage hedgehogs, a rapidly declining species, into their gardens.  The three key messages are:

To help The Wildlife Trust map out hedgehog activity there is now an online tool to report sitings.  I’m quite chuffed that my parents have recently been able to record a live siting in North Walsall!  Go to http://www.bbcwildlife.org.uk/hedgehogsighting and record any ‘hog siting’!

The film will be screened in early June – more details to follow nearer the time!

I’m chuffed to bits to be able to share the ‘Green Rivers Wildlife Diaries’ film with everyone. It was premiered at the end of 2009 to a lovely audience comprising friends and family of the group and local decision makers from around Walsall.

Read more about the project, have a look at the film and let us know what you think! It’s now up on my website here!

As I type the DVDs are being produced and packaged, the activities are being prepared and our fantastic, talented young people are rehearsing their presentations for next week’s Grand Premiere of ‘Green Rivers Wildlife Diaries’.

The young people from Blakenall and Goscote in Walsall have worked with Julia Morris from The Wildlife Trust and myself over the last year, to devise the project, produce a workplan, submit a funding bid and then research, plan and film their own short documentary!  The result is a really lovely film which illustrates just how passionate and knowledgeable the group are about the wildlife on their doorstep.

But this film is more than just a record of urban wildlife.  The group from Green Rivers Community Association used the BBC’s ‘Springwatch’ as their starting point.  Through the film they hope to show local residents the wealth of wildlife in Walsall, and to educate them about how to look after these animals and create habitats for them to thrive.  It contains practical advice on everything from creating a bee and butterfly friendly garden, to how to build an insect home, how to spot a water vole and how to tell the difference between a frog and a toad!

The group would love for local residents to attend the Premiere on Thursday 17th December at Green Rock Primary School.  The screening will begin at 7pm sharp.  If you live locally and want to attend then please contact Julia on 01922 711 228.