Planning, collaborating, telling stories.  All the stuff that I love.  Here’s a bit of an overview of what I’ve been up to so far this year.

I have spent part of this year working part time as a Project Co-ordinator on ‘Living Memory’, a two-year Heritage Lottery supported project that records and celebrates photography collections and life stories from across the Black Country.  It’s been an intense and rewarding role, delving into fascinating stories and stunning images from across the area, as well as making connections with community organisations and projects that I was completely unaware of before.  The project will hardly scrape the surface of the rich narratives there are to uncover, but you can get a flavour of what we have been doing on the project website (where you can also sign up to get occasional updates into your inbox) or by following us on Instagram, Facebook or Twitter.  A personal favourite story of mine is John Shrimpton’s – whose efforts contributed to the formation of the Sandwell Valley as a nature reserve and protected it from development.

I’ve continued my longstanding relationship with the Lichfield Festival this year, developing their ‘Hear My Voice’ learning and participation programme, this time with elders across Walsall and Lichfield.  Textile Artist Liz Blades and I have been visiting Dementia Cafés, the weekly ‘Mind Matters’ session in Beechdale and drop ins for over 50s to develop our project on the theme of journeys.  I have been taken aback by how open people have been about discussing their memories – often they touch on personal traumas and tragedies and frequently these experiences have not been shared so candidly before.  Our task will now be to carry this work forward into the next phase.  The textile patchwork quilt which illustrates some of these memories will be on display at the Lichfield Garrick Theatre over the course of the Festival.

Meanwhile, work has continued on the Birmingham Friends of the Earth Heritage project.  A group of volunteers have been scouring through the archives housed at the Library of Birmingham and have unearthed some fascinating stuff about the 40 year history of The Warehouse, BFoE’s home since 1977.  A few weeks ago I trained up a team of volunteers in a morning to conduct oral history interviews with people who have a connection to the building and to BFoE’s work.  With 17 people to interview over the course of the afternoon it was a hectic day, but so many lovely anecdotes emerged and there was a really strong sense that these people were early pioneers and advocates of many of the actions that we see as positive and important today.  I’m in the process of knitting these stories together.  A short film and accompanying booklet will be ready for the Autumn. 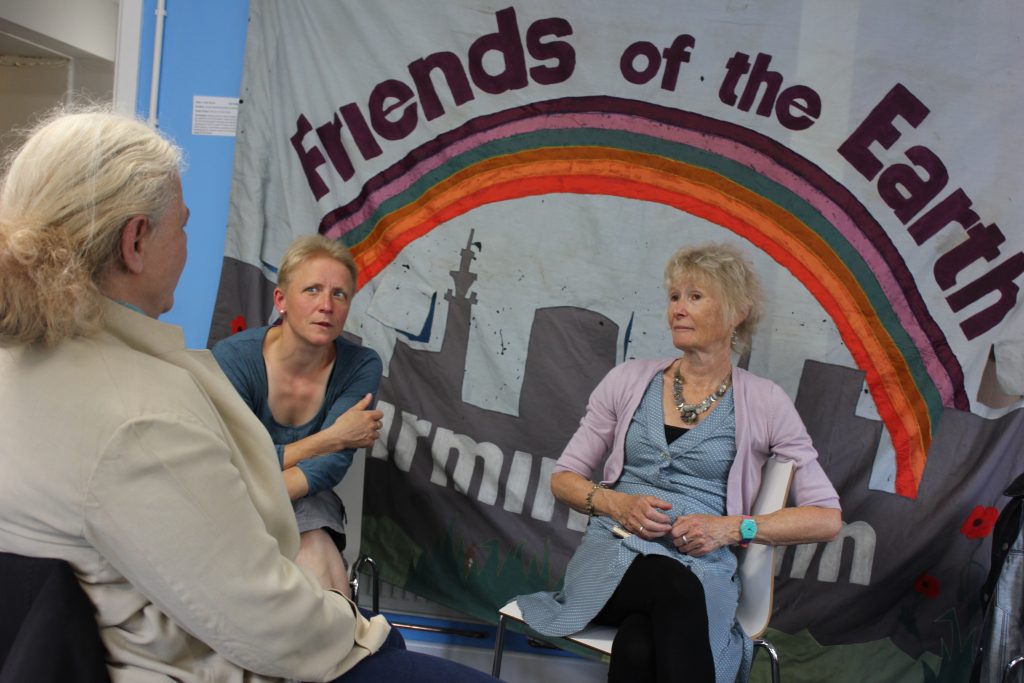 Behind the scenes I’m still plotting and planning other projects, including ongoing collaborations as part of the People’s Heritage Co-operative.  Next week I’m embarking on a new project making a film in a setting for women with mental health needs.  I’m also going to be presenting Women’s History Birmingham‘s work to this year’s Community Archives and Heritage Group conference, which this year focuses on Conflict, Protest and Reconciliation.