When I was asked earlier this year if I would be willing to document a performance by ‘Connect and Co’, a group of visually impaired performers who had developed a piece for stage with Extant, I jumped at the chance.

Almost exactly a year ago I wrote on here about how much I had enjoyed documenting some really excellent work by Extant, increasing access to drama and performance opportunities for people with VI in Manchester and Birmingham.  Their belief that not only should people with VI be able to access artistic opportunities, but that they can also bring an energy, creativity and perspective unique to their own experiences was really exciting to me.  It was clear that there was an appetite to develop the initial drama workshops in 2016 into something more.  You can learn more about that project and view the film here. 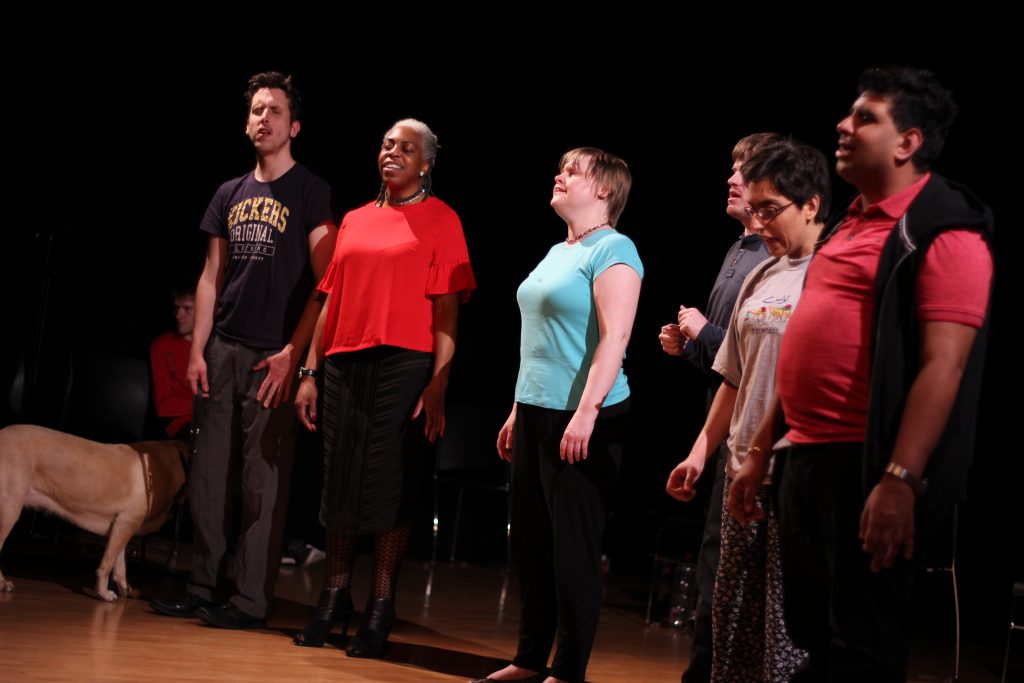 A year later and Extant wanted to take that work a step further by staging a performance at mac Birmingham.  They worked in partnership with Birmingham Vision who recruited and supported the performers, some of whom had no previous experience of live performance.  Directors Suriya Roberts-Grey and Jo Gleave worked with the group to create a performance which was developed and driven by the participants themselves.  Rehearsal space and artist development support came from mac Birmingham, one of Extant’s ‘Regional Hubs’ featured in last year’s film.

What emerged was an evening of short sketches called ‘Getting on with Life’, exploring different aspects of life living with VI, using humour to show the challenges and adventures of everyday life.  From dealing with incompetent taxi drivers, challenging irate gym staff or exploding assumptions about their love lives, the performance sought to highlight what ‘Getting on with Life’ means to them.  The full performance (35 mins) is here.

As well as being able to articulate their everyday challenges, it was the first time that many of the participants had been recognised for their creative talents.  Ian, one of the performers, believed strongly that the sharing was an opportunity to highlight the artistic potential within the VI community.

The project also raised the question of how theatre makers and venues can realise the potential of people with sensory impairments through creating multilayered, multisensory and accessible work where audio description and touch tours can be tools which enhance the experience of all theatre-goers (there will be more musings on that in the second part of this blogpost…).

There is already talk of performers’ next steps, of taking advantage of other opportunities at mac Birmingham, of future performances.  The film below features footage of rehearsals, excerpts from the performance itself and interviews with project staff and participants.  Watching it, you can’t help but sense that this is just the start of something…