‘If I Could Reach Home‘ is a project which brings together Bharatanatyam and Kathak dance with exploring themes of home and belonging.  Devised by the very talented Magdalen Gorringe, both professional and non-professional dancers have been choreographing their own works to perform at mac Birmingham and Rowheath Pavillion.  Both performances feature BBC Young Dancer Category Finalist Vidya Patel. 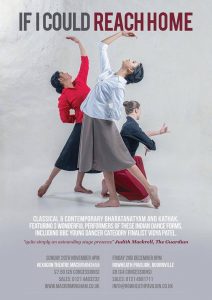 Bharatanatyam is a traditional Indian dance form which is set to classical poetry, but Magdalen wanted to play with the discipline and incorporate other voices into the piece.  The two performances will feature poetry created by female asylum seekers and two community groups from Kings Heath and Bournville.

I have been documenting some of the project to date, and it has been inspiring to observe how the easily dance has developed alongside a narrative – even for people who may not regard themselves as dancers.  I have one more rehearsal session to film before I film the final performance at Rowheath Pavillion.  Tickets are sold out at mac, but do try and nab a ticket for Rowheath.  And if you REALLY can’t make it, then I will be sharing the work online in the next few months.